202.224.3121    They count every call.
Impeached AGAIN!
The Moment of Truth
Insurrectionist-in-Chief

We Marched to  Impeach!

Donald J. Trump violated the Constitution every day  - since the moment he was sworn into office as President.  With violations of the Emoluments Clause, obstruction of justice, serial gaslighting, breach of the public trust and inciting insurrection, he  demonstrated his unfitmess to serve.

The Constitution gives the House of Representatives the sole power to impeach an official, and it makes the Senate the sole court for impeachment trials.

Impeachment is up to Congress, not a court of law.  It depended primarily on our increasing numbers and the pressure that We the People put on Congress. We did it!

On July 2, 2017, Americans came together to march for impeachment in forty-five cities and towns throughout the nation.  Since then, patriots have continued the fight, in groups, actions and elections.  When we persist, we prevail.

<
>
Violation of the Foreign Emoluments Clause. Article I, Section 9, Clause 8. The framers of the Constitution created this clause to ensure that US officials would not be corrupted by gifts or payments from foreign powers, yet President Trump, through companies that he owns, receives a constant stream of cash and favors from foreign powers and their agents. Read more >>
Domestic Emoluments Clause. Article II, Section 1, Clause 7.The President shall, at stated Times, receive for his Services, a Compensation, which shall neither be encreased nor diminished during the Period for which he shall have been elected, and he shall not receive within that Period any other Emolument from the United States, or any of them. Read more >>
Obstruction of Justice. Article II, Section 1.8. In his conduct of the Office of President of the United States, Trump is in violation of his oath faithfully to execute the Office of President of the Unites States and, to the best of his ability, preserve, protect and defend the Constitution of the United States, and in his duty to take care that the laws be faithfully executed, has prevented, obstructed, and impeded the administration of justice. Read more >>

Host a March in Your City

The Impeachment Movement is growing by the day.  If your city has not yet hosted an Impeachment March, why not consider starting one where you live?  New alliances are forming to carry the People's Voice to Washington louder than ever.  We are happy to help you get started.  Create a Facebook event, then use the image below as your event header. 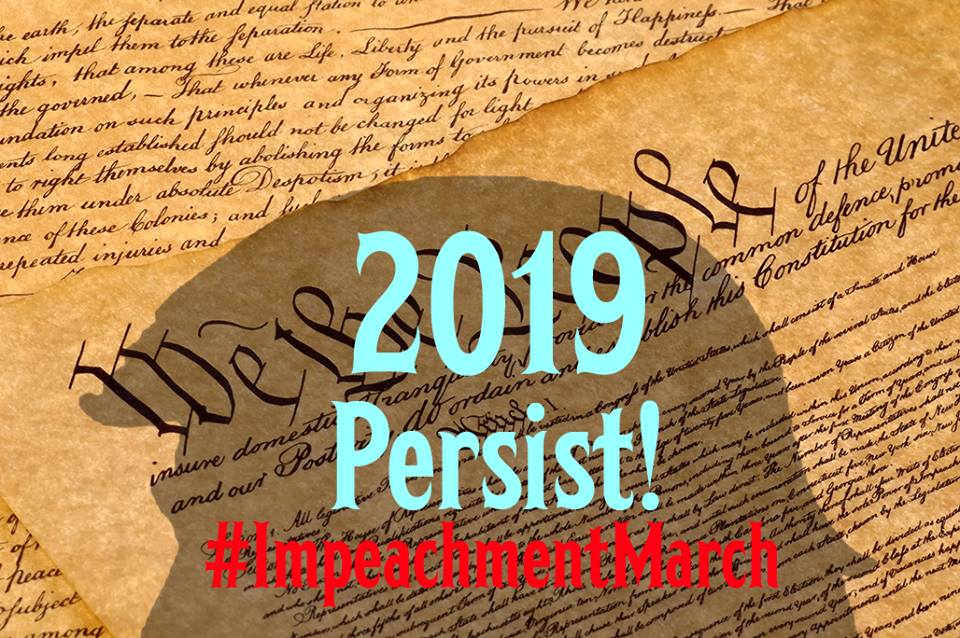 Feel free to email us with any other questions. You'll also find our contact information at the bottom of each page.